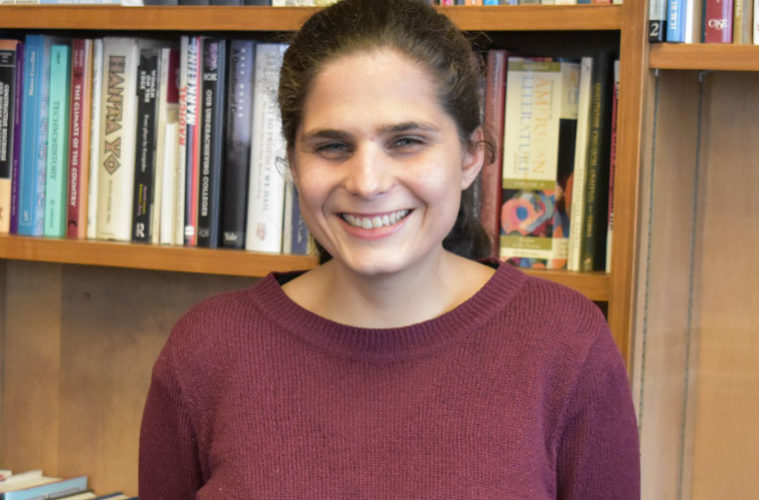 Audrey Bienfait grew up taking things apart and rebuilding them to gain a better understanding of how things work. Her early curiosity developed into a strong passion for quantum physics.

Bienfait is the recipient of the 2019 Michelson Postdoctoral Prize, an annual international award presented by the Department of Physics to an outstanding postdoctoral researcher in any subfield of physics. She is the 23rd recipient of the distinguished prize.

Each year, winners of the award are invited to spend a week on campus and are asked to speak on topics related to their research. Bienfait has been in residence at Case Western Reserve this week and is delivering three lectures. Bienfait delivers her final lecture of the residency on Friday from 12:45-1:45 p.m. in Rockefeller Building, Room 221. Her talk on “Microwave amplification at the quantum limit” is free and open to all.

“We give this award every year and we’ve had amazing people win it,” said Case Western Reserve University physics Professor Harsh Mathur. “The award is open to all fields of physics, which can make the choice difficult. But I can say that this year, it was unanimous in our committee that this is exciting work.”

Bienfait was selected for her groundbreaking experiments demonstrating the quantum limit of sensitivity in electron spin resonance and entangling superconducting bits using phonons. During her week-long residency on campus, Bienfait is giving a series of lectures along with the Michelson Postdoctoral Prize Colloquium, “Interfacing quantum microwaves to spins and phonons.”

Mathur said her work is “spectacular.”  “Audrey has not one but two home runs in her career already. She has performed experiments entangling quantum circuits using sound waves that may be important for future quantum technologies. And she has improved the sensitivity of a measurement method analogous to MRI to an unprecedented degree that could ultimately be useful in biology.”

Bienfait is a condensed matter experimentalist who works in the area of quantum circuits with a particular focus on electron spin resonance and superconducting qubits. She completed her doctoral work at Universite Paris-Saclay in 2016, was a postdoctoral fellow at the Institute of Molecular Engineering at the University of Chicago and is now a faculty member at Ecole Normale Superieure in Lyon.

About the Michelson Postdoctoral Prize

The Michelson Postdoctoral Prize was named after Albert Michelson, professor of physics at the Case School of Applied Science from 1882 to 1889. Michelson and his colleague Edward Morley, professor of chemistry at Western Reserve University from 1869 to 1906, are best known for their experiment that provided decisive empirical evidence for the future theory of relativity. Michelson won the first science Nobel Prize awarded to an American in 1907.