Made on behalf of late alum, who invented Nike Air Sole, and wife

The endowment will go toward outfitting about 500 student-athletes who participate annually in the university’s 19 women’s and men’s varsity sports. 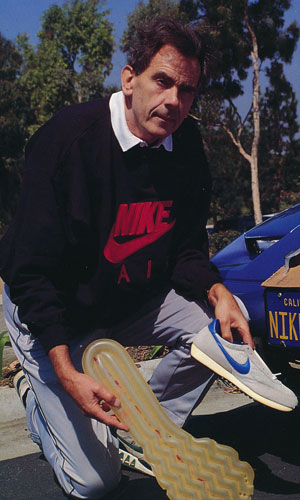 “Since my father is the inventor of the Nike Air Sole, it seems fitting to make sure his alma mater is always outfitted in Nike uniforms and, of course, shoes,” said McMahon, who made the gift on behalf of her late parents. “It is with great pleasure and enthusiasm to be able to create the M. Frank Rudy and Margaret Dormiter Rudy Athletic Endowment. May the teams be proud and self-confident as they compete for Case Western Reserve University.”

Lou Stark, vice president for Student Affairs, said the university was “profoundly grateful to the Rudy family for this fabulous gift. It will benefit CWRU student-athletes for generations to come.”

Rudy was a 1950 graduate of the former Case Institute of Technology, who majored in mechanical and aeronautical engineering. At one point after graduation, he worked on projects for the Saturn and Apollo rocket engines for NASA.

However, by 1969, the aerospace industry was in decline, and Rudy began considering his career options. Margaret asked him what he’d most like to do in life. Rudy was an avid skier, and responded that he was interested in entering the ski-equipment business.

With Margaret’s encouragement and her desire for a more comfortable ski boot, he left the aerospace industry and developed an air-cushioned boot that essentially put “air” around the ankle and sides of the foot. This ultimately led to his creation of the Nike Air Sole, which, when used in athletic shoes to “put air under the foot,” revolutionized the athletic-footwear industry. Rudy ultimately held more than 250 patents.

“My father was always extremely proud of his alma mater and, through his endowment, he and my mother supported the groundbreaking research being done in CWRU’s outstanding School of Engineering,” McMahon said. “Such a noteworthy university should be complete, including the athletic department, since its teams are in the public eye, representing the school all the way to the national level.”

In fact, the Spartans’ Nike athletic uniforms already honor Rudy. Since fall 2014, Case Western Reserve’s uniforms, which were gifted by Nike and the Rudy family, have featured a custom-designed emblem with the initials, “MFR,” for Marion Franklin Rudy. The 3D design, with special texture and shine, resembles inflated Air-Sole units and orbiting planets that pay tribute to Rudy’s career as an aerospace engineer.

McMahon worked with Nike to make that gift happen. The Rudy athletic endowment extends that commitment.

“This generous endowment from the Rudy family will have a tangible impact on the daily lives of our Spartan student-athletes,” said Amy Backus, director of Athletics and chair of Physical Education. “They compete on a national stage and represent well what this university is known for: research, competitive drive and innovation—all factors in Frank Rudy’s contribution to the Nike Air Sole technology. We are truly grateful for this wonderful gift.”